The International Society of Christian Writers

Is a group of Christian writers who have a passion and desire to influence the world with the Christian world view using various kinds of writings.

The articles within this site are specifically written for the purpose to encourage, challenge and equip Christians to be an active part in the world (to be the salt and light of the world). Some of the articles included in this site can also be a challenge to sceptics of the Christian faith.

The style of the GSM is that of a quarterly periodical. We will try to release and update the content of this site either monthly or quarterly, depending on the nature of the articles.

Contributor and general editor of GSM. He and his wife Danielle are evangelical missionaries who live and minister in Central Scotland . Born, raised and born a second time in Southern California . They have ministered extensively with the Calvary Chapel movement in California , until they received their calling from God to do similar ministry in Scotland with and amongst other missionaries. Scott's writings and teachings are philosophical in nature, with down to earth principles and applications. His featuring article is on Christian Discipleship, were he challenges Christians to take seriously there calling as disciples. 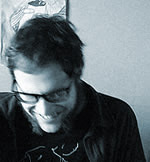 Contributor and editor of GSM. Originally from Indianapolis, Indiana in the U.S.A., is the son of one time Southern Baptist pastor, O. J. Petersen. (O. J. also happens to be a rock n roller' who was converted during the Jesus Movement' of the 1970's.) Daniel believed in Jesus Christ at age 16, but does not consider himself to have counted the cost' and taken up his cross' as a disciple until age 20. In the following year he met and married his wife, Andrea, and they began their family, serving God as husband and wife and as parents. They now have three children: Lydia (age 8), Otto (7), and Jack-Lewis (5). During this time Daniel was also in a punk rock band called Blaster the Rocket Man for 9 years, singing' and preaching the Gospel. In 1999 Daniel and Andrea felt God releasing them from the call to America and moving their hearts overseas. Since June 2002, the Petersen's have lived and worked as full-time Christian missionaries in Glasgow, Scotland, where their children are enrolled in primary school, the two youngest in all-Gaelic medium education. They plan to live in Scotland permanently. Daniel's interests include literature, philosophy, theology, music, creative writing, good food, good films, and long impassioned discussions during which he tends to get over-excited and offend his friends. He is studying classics and philosophy part-time at the University of Glasgow. He wears large, thick, black-rimmed glasses and has rather woolly lamb chop' sideburns. He has been described visually as a cross between Buddy Holly and Wolverine. 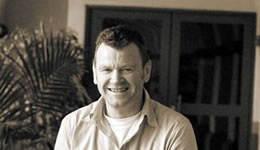 Married to Lyn and has two children - Steven, 24 and Pamela, 21 (oh and a dug - Rocky, 74 in doggie yrs). Born in Glasgow Sept 1952, lived in Paisley 21yrs and now lives in Glasgow. He is a press photographer and accomplished musician, worship leader and lyricist.

Lyn and Ritchie are both first generation believers from nominal Church of Scotland backgrounds, Lyn being the first to get saved three months after they got married in 1976. Ritchie followed in her footsteps, eight months later. They were both part of a small church plant in the west end of Glasgow , where they began their discipleship and growth in Christ. They were blessed to see quite a number of their family and friends come to faith.

Ritchie is at present hoping to take Pilgrim's music on the road, as an encouragement ministry. Interests include, Motor cycling, distance running, cooking and generally having a laugh and actively presenting Christian living as a viable alternative, to purely secular living. 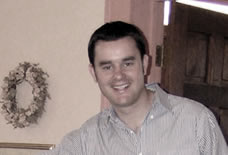 Has been a Christian ever since he was wee. His father is a minister which has given him the opportunity to be involved in the Church most of his life. Matt attended Horizon's school of evangelism and is a graduate of Calvary Chapel Bible College in California .

After graduating Matt went on staff at Calvary Chapel Bible College in Austria for two years. During that time he had many opportunities to serve, some of which were teaching and leading outreaches. He lead outreaches to Slovenia , Ireland , England , and Scotland .

It was on the outreach to Scotland when the Lord confirmed that this is where he was to plant a church. So after the two years of service in Austria were finished, Matt went straight to Scotland.