God on the Slab
Ritchie Miller

There He is, the one who healed the sick and raised the dead, the one who fed the thousands from a few loafs and fish, the one who claimed that if the temple were destroyed he would raise it again in three days, and to top this off, His blasphemous claims to be the only Son of God the father.

'The Passion of Christ' 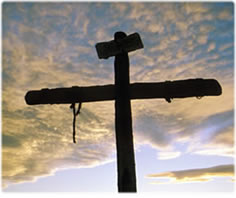 One of the most talked about events of the year is the release of the film The Passion of Christ , directed by Mel Gibson. The contributors of GSM considered the cultural significance of this movie and if it has made a positive impact on viewers around the world. We asked was the film truly necessary or even accurate? How well was it received, by both the Church and the world? Hear what some of our contributors and other sources say about this film.

Defining truth is something that people have great difficulty 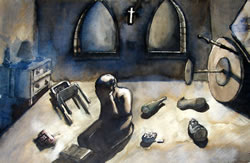 with in this day and age. Someone might say, Some things are true and some things are false. I think that statement is reasonable but there are many people who evidently do not believe it. The mind set of the present age seems to be that some things are either true or false according to the point of view from which you look at them. Black is white and white is black, according to circumstances; and it does not particularly matter which you call it. 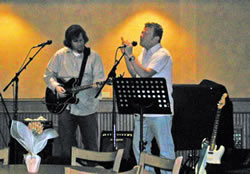 Pilgrim became the working title of a music project that Scott Key and Ritchie Miller embarked on last SeptemberScott being a young, full-of-energy missionary from Orange County, CA, and Ritchie being a tired middle-aged old cynic whose main ministry was that of Acts 2vs 17: Your Old Men shall dream dreams. (This is a ministry I seek to fulfil at almost any time of day, no matter what company I'm in.)

-- The Spiritual Disciplines, by Scott Key

-- Book, music, film and other reviews -- click here to view

-- New feature articles will be added every other month, so please visit often to see what is new.